FLOYD, VA. (March 31, 2022) – If the breakfast biscuits baked at the Hardee’s® restaurant at 402 E. Main St. taste delicious, that’s because they are made by a real Biscuit Maker Champion.

Local Hardee’s biscuit maker Crystal Link was named as the 2021 Best Biscuit Maker of Boddie-Noell Enterprises, the largest Hardee’s franchise operator in the nation. Link advanced beyond more than 700 other biscuit makers at 343 Hardee’s restaurants across four states to win the overall award.

Boddie-Noell honored the four regional winners during a banquet at the company’s Rose Hill Conference Center near Nashville, N.C.

Link says the key to creating the best Hardee’s Made from Scratch™ biscuit begins with caring about the quality of your biscuits and loving what you do. Her favorite Hardee’s biscuit is the Steak Biscuit.

The competition started in October, and each biscuit maker was evaluated based on the quality of his or her biscuits, knowledge of proper biscuit equipment, cleanliness and care of the biscuit equipment, knowledge and execution of company procedures, grooming and appearance. The competition’s judges included general managers, district managers, regional directors, vice presidents and other leaders in the restaurant division of Boddie-Noell at the five levels of competition.

Link, who lives in Patrick County, has worked as a biscuit maker at Hardee’s for two years. In June, she will compete on behalf of Boddie-Noell in a biscuit-making competition hosted by Hardee’s parent company, CKE Restaurants, which will pit against each other the top biscuit makers system wide from across the United States.

When she isn’t making biscuits, Link enjoys baking, hiking and photography. She began baking biscuits for her family at three years old.

With 60 years success in 2022 as a Hardee’s franchisee, family-owned Boddie-Noell is the largest Hardee’s franchise operator in the United States with 342 restaurant locations in four states. The company is based in Rocky Mount, N.C. For more information, visit www.bneinc.com. 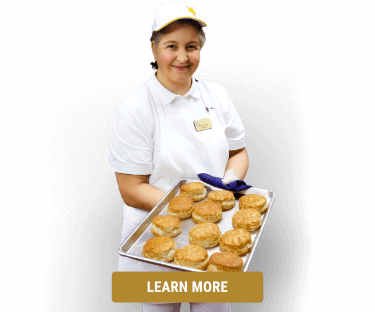